Welcome to the Great Indoors: Museums Beckon in the Berkshires

WILLIAMSTOWN, Mass. — Museums that seemed on the brink of reopening in New York are staying shut after Gov. Andrew Cuomo modified the state’s reopening plan last week. In California, arts institutions that had briefly reopened have had to padlock their doors once again. As the coronavirus epidemic continues to intensify across the country, museums have had to recalibrate their plans for renewed engagement. Remember when you thought your “first” museum visit would feel like a payoff as the pandemic abated?

Here in the Berkshires, after four months when the only museums I saw were on my phone screen, I went to two: the Clark Art Institute in Williamstown, and the Massachusetts Museum of Contemporary Art in neighboring North Adams. Both now require advance booking, as well as masks. Both limit admissions to a fraction of total capacity, though you shouldn’t have trouble finding a slot; with all of the region’s cultural festivals canceled — Tanglewood, Jacob’s Pillow, the Williamstown Theater Festival — the museums have regrouped for local audiences and the hardy art lovers ready to travel here. (Massachusetts requires visitors from out of state to self-quarantine for 14 days, though those from New York, New Jersey and the other New England states are exempt from the directive.)

I expected what would surprise me most were the new sanitary rules: how circulation is regulated, how guards handle their new responsibilities, what happens in the cafes and the bathrooms. But the rules weren’t that obtrusive — if you can handle a supermarket aisle in these bad new days, you can handle an enfilade of galleries. The greater surprisewas the impact of the art itself, which in some rooms feltlike a salve for miserable times, and in others like trivialities from a vanished world.

The mechanics of arrival at Mass MoCA, once you’ve got a ticket on your phone, are nearly painless. In the museum’s courtyard, under a tent set up beside Natalie Jeremijenko’s grove of upside-down trees, a masked attendant scanned me in, asked if I had any Covid symptoms, and went over some basic social distancing principles. Inside, a few stairwells and doorways have one-way indicators, white dots on the gallery floors indicate sensible places to stand, and six-foot arrows on the walls suggest appropriate interpersonal gaps.

Not that breathing room was hard to come by: Mass MoCA’s 250,000 square feet of converted factory buildings offer ample acreage for hygienic art appreciation, and I was often the only person in a gallery. The more than 100 wall drawings by Sol LeWitt, whose colors and lines ripple across three stories of an old mill, were all mine on a Saturday afternoon, as were the galleries devoted to Jenny Holzer, whose viperous axioms — “PROTECT ME FROM WHAT I WANT,” “MONEY CREATES TASTE,” all the classics — appear on wheatpasted posters or curved LED signs.

Mass MoCA has also opened two new exhibitions, just a little delayed by the Covid closure. One is a large showcase by Blane De St. Croix, an ecologically minded artist from New York. Tumbledown stacks of painted wood and resin, or a huge sheet of punctured, deliquescent Styrofoam, suggest melting permafrost and worn rock formations; cast sheets of crumpled paper map changing Arctic surfaces. His work has a worthy green heart, though I’m far more interested in art that dramatizes the experience of living through climate change (as suggested through some documentary footage shot in Utqiagvik, Alaska, the northernmost city in the U.S.) than the mere fact of its occurrence.

A group exhibition, “Kissing Through a Curtain,” features 10 artists working around the topic of translation, though the theme is so broadly defined — words into new languages, images into new contexts, people into new nations — that it collapses into itself. Its strongest participant is the Brooklyn-based artist and writer Kameelah Janan Rasheed, whose room-filling collages recut Black poetry, philosophy and archival matter into compelling environments of new meaning. But far too many artists here “translate” as literally as the Duolingo app: Justin Favela remakes academic Mexican landscape painting, but this time with the tissue paper of piñatas; Jessica Vaughn remakes the minimalist grid, but this time with Chicago subway seats.

Just west in Williamstown, the Clark has had to make some significant recalculations to its exhibition program. Two shows have been delayed for a year. A summer show of site-specific outdoor sculpture, meant to be encountered across the institute’s bucolic 140-acre estate, is now being installed on a rolling basis. Right now just one work is ready: Analia Saban’s charming “Teaching a Cow How to Draw,” a wooden fence running across the pasture, whose diagonal split rails recall lessons in an introductory art course: one point perspective, the Rule of Thirds, the golden ratio. The fence is a drawing in space for both human visitors and the Clark’s resident bovines, who’ve already taken a liking to it. (Sculptures by Nairy Baghramian, Haegue Yang and others will be installed later this summer.)

Further interspecies collaborations can be found in a pavilion at the top of the hill, where the Berlin artist Lin May Saeed’s darkly humorous exhibition “Arrival of the Animals” features sculptures, drawings, bas-reliefs and metalwork that probe the ethics and emotions of human-animal relationships. There are motifs both familiar (St. Jerome and the lion) and unforeseen (a camel hanging out in front of the Doha skyline), but one polystyrene effigy, completed before the pandemic, has an unexpected new resonance: say hello to the pangolin, the long-snouted, scaly mammal suspected of being the host of the novel coronavirus. A zoonosis like Covid-19, Ms. Saeed’s art suggests, is just the most virulent manifestation of a boggling net of interdependence between us and the animals we love, sell, eat, draw.

Still, it’s the historical collection of the Clark, which generously kept its grounds open to the Williamstown public throughout the lockdown, that feels most meaningful to return to. (Each gallery has a maximum capacity posted at its entrance; on the Sunday I went, I never had to wait to enter one.) There’s a Constable wheat field painted in 1816 whose bounty belies that year’s calamitously cold summer, when failing crop yields provoked health and economic crises not unlike our own.

There’s an impossibly tender late still life by Manet, each rose petal so fugitive and modern that I felt my breath catching beneath my sweaty surgical mask. There’s my favorite Bonnard, an 1891 picture that compresses two women playing with a dog into a riotous clash of polka dots, gingham and sunflowers. And a presentation of newly donated drawings, from the collection of Herbert and Carol Diamond, includes lovers by Ingres and saints by Delacroix that are models of rigorous perception.

Is it frivolous to say that the 19th-century French paintings and drawings at the Clark offer as much or more today than the installations and videos at Mass MoCA? I don’t think so. If one of the hallmarks of the Covid crisis has been its acceleration of changes already in progress, then in the art world we’ve seen how quite a few practitioners who trumpeted their relevance are not as relevant as they claimed. What have we needed these past four months? What have we not missed after all?

In Mass MoCA’s translation show, a pamphlet tells us that the artists “address timely, urgent questions,” even as new wall texts anxiously apologize that the show came together before the coronavirus outbreak and the murder of George Floyd. Might we now accept that contemporary art — even when it turns its gaze to race and nation, disease and climate — is not as “urgent” as a breaking news report? Might the truly urgent enterprise, in a time of plague and protest, be not posing questions over and over, but helping to forge a public capable of answering them?

Apologies for going all Kantian, but what’s revealed in the Covid-era museum is that art’s political power still derives, above all, from having no pragmatic application. It can’t fix the world. It doesn’t function as a slower, more elite communication medium. It stands for itself, it confronts our imagination and our intellect, and so it shapes our capacities as free citizens. Which means there’s as much relevance in an Ingres drawing or Bonnard painting as in Mr. De Saint Croix’s ecological installations or Ms. Rasheed’s textual collages, insofar as each offers us just a glimpse of human freedom — that promise that every day now we feel slipping away from us, and that we still cannot do without. 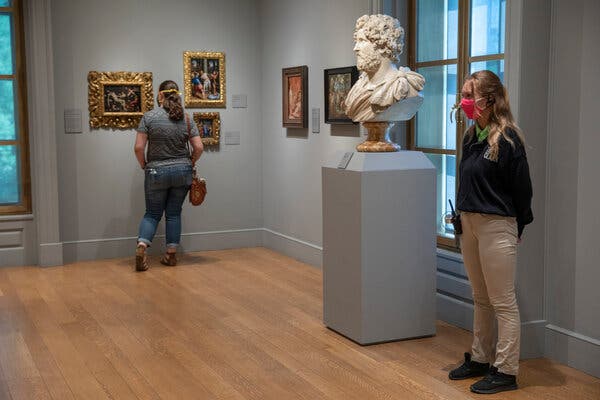