U.S. Hospitalizations for the Coronavirus Near April Peak 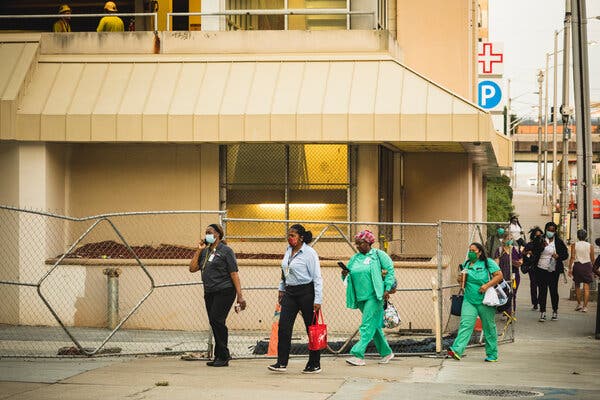 They are hooked up to ventilators, relying on the machines to breathe. They are taking experimental drugs that doctors hope will ease their agony. They are isolated from their families, fighting to recover on their own.

More people are on track to be hospitalized with the coronavirus in the United States than at any point in the pandemic, a disturbing sign of how the current surge has spread widely and is seriously sickening as many people as ever.

Across the country, 59,628people were being treated in hospitals on Wednesday, according to the Covid Tracking Project, nearing an earlier peak of 59,940 on April 15, when the center of the outbreak was New York.

The country is averaging more than 66,000 new virus cases per day, more than twice as many as a month ago, and deaths have also started trending upward, with an average of more than 800 daily. But hospitalizations may be the clearest measure of how widely the virus is causing the most serious illnesses, and could offer a glimpse of what is ahead.

“Once you get to the point of being hospitalized or in the I.C.U., some notable portion of those people will die,” said Natalie E. Dean, an infectious-disease expert at the University of Florida. Even when patients walk out of the hospital, “we don’t know what the long-term consequences are,” she said. “Surviving doesn’t mean thriving.”

Not long ago, things seemed to be improving. Fewer than 28,000 patients were hospitalized as of mid-June, when a new surge of cases was appearing throughout the Sun Belt.

The uptick in hospitalized patients around the country reflects a different phase of the pandemic — a widening geographic area, especially across the South, for the most serious illnesses compared with what had been a relatively concentrated crisis in the spring.

Back then, nearly one in five hospitalized patients were in New York, and the city had to set up mobile morgues to keep up with the rising deaths. Now, the situation looks far different, and California, where the virus is surging, has reported more cases than New York. In the past week, both Florida and Texas have added an average of more than 10,000 reported cases each day, with California not far behind.

The spike in hospitalizations for the virus has been driven in part by people younger than 50. That group made up nearly 40 percent of the hospitalizations as of earlier this month, compared with 26 percent in late April, according to the Centers for Disease Control and Prevention. The shift offers one hopeful sign: Young people are less likely to die from the virus.

The majority of hospitalizations — about 60 percent — are now in the South, according to the Covid Tracking Project, which is run by The Atlantic and collects state hospitalization data.

In some places with lots of seriously ill patients, the rise in hospitalizations has tested the limits of local hospital systems. Some of the most severely battered communities are in Texas, where more than 10,800 people were being treated in hospitals for the virus on Wednesday, a record high for the state. The situation is most acute in the Rio Grande Valley on the Texas-Mexico border, where more than a third of families live in poverty.

“Our hospitals are maxed out. They are at 100 percent capacity,” said Frank Torres, the emergency management coordinator for Willacy County. He described paramedics and patients spending hours in ambulances before they could enter hospitals. Inside, patients are left in the halls of chaotic emergency departments, waiting for a bed.

But in a sprawling state like Texas, the crisis is not always as apparent as it was in densely packed New York City, where sirens were frequently heard and people emerged from windows and balconies each night to support front-line workers, sending cheers all around the city.

In San Antonio, an official with Christus Health told reporters that its hospital system was running out of space for morgues and was preparing to store bodies in refrigerated trucks even as ordinary life is proceeding in other parts of the city. One of the biggest movie theaters in the area, the Palladium, remains open for discounted $5 showings.

The broadening crisis means that even hospitals in states without the worst outbreaks are feeling the strain. In Oklahoma, hospitalizations have been on the rise since mid-June, and about 80 to 90 percent of hospital beds have been filled in recent days. Even so, its situation seemed enviable compared with neighboring Texas.

“Houston hospitals are calling Oklahoma hospitals trying to place their sick patients,” said Dr. George Monks, president of the Oklahoma State Medical Association. Summers are typically a slower season for hospitals, Dr. Monks said, which has left him worried about the well-being of health care workers and the long months ahead.

“There is just no pool of doctors and nurses available that we can hire to come in and help,” he said. “You can’t hire them from Texas. They’ve got their hands full.”

Aubree Gordon, an associate professor of epidemiology at the University of Michigan, said the rise in cases and hospitalizations appeared to reflect people returning to pre-pandemic behaviors, such as going to bars or gathering with friends. The number of hospitalizations, she said, was sure to rise further, and she said some political leaders seemed wary of imposing restrictions again.

“Those locations are more hesitant than before to shut down because they feel like they shut down before and it didn’t prevent them from having the big outbreak,” Dr. Gordon said.

In and around Miami, so many patients have packed hospitals that daily reports routinely show wards at over 100 percent capacity — a sign the facilities have filled their regular beds and are operating with additional beds set up solely to accommodate the surge.

“I always worry about having a scenario like we saw in New York where the hospital system is overwhelmed,” said Dr. Yvonne Johnson, the chief medical officer at South Miami Hospital. “Right now, we are handling things.”

At Jackson Memorial Hospital in Miami, some coronavirus patients are being treated in a large, air-conditioned tent in the hospital parking lot until a room opens up, said Dr. Lilly Lee, the hospital’s director of emergency medicine. She said that the hospital had treated a wave of younger patients in June, but that more older people are now coming in with the virus.

“Over the past week, we’ve noticed that the patients are more 60, 70,” she said. “That was our concern initially: That some of these younger people out there would cause illness in the older and more vulnerable population.”