Three Decades After His Coup, Sudan’s Former Ruler Is Held to Account

CAIRO — Three decades ago, a little-known army officer named Omar Hassan al-Bashir seized power in Sudan, ushering in a long period of brutal rule that would push the sprawling African country into a series of destabilizing wars, cripple its economy and result in humiliating international isolation.

Now Mr. al-Bashir is being called to account for his actions.

The autocrat, 76, who was ousted last year following street protests, was led into a courtroom in Khartoum on Tuesday to stand trial for his role in the bloodless 1989 coup that toppled the democratically elected government of Prime Minister Sadiq al-Mahdi. Also in the dock were 27 of Mr. al-Bashir’s most senior officials, including former vice-presidents, ministers, governors and military officers.

Armed policemen wielding batons and tear gas canisters stood guard outside the courthouse, where the accused were led into cages for a brief hearing. Dozens of relatives gathered outside the building, jeering and shouting slogans including “God is great!”

The prosecution is a rare instance of a dictator being forced to answer for the putsch that catapulted him to power — even if in Mr. al-Bashir’s case, a key accomplice has already evaded justice. The Islamist cleric Hassan al-Turabi, widely seen as the true architect of the 1989 coup, and the power behind Mr. al-Bashir for many years until they had a falling out, died in 2016 without facing trial.

For Mr. al-Bashir, this is one prosecution among many. During last year’s corruption trial, he admitted taking $90 million in bribes from Saudi Arabia’s rulers. But the gravest charges have yet to come before a court.

For over a decade, the International Criminal Court at The Hague has sought Mr. al-Bashir over his role in the conflict in the western region of Darfur, where Sudanese troops and allied militias killed, pillaged and raped in a yearslong campaign of ethnically driven violence that resulted in several hundred thousand deaths.

The Hague court indicted Mr. al-Bashir a decade ago on charges of genocide and crimes against humanity, and charged other senior figures including the former defense minister, Abdel-Rahim Muhammad Hussein, who stood trial alongside Mr. al-Bashir on Tuesday.

Although Sudan’s transitional government, which is jointly led by civilian and military leaders, indicated earlier this year that it was ready to send Mr. al-Bashir to The Hague, there has been little sign of that happening. Instead, the new administration has appeared to shy away from a trial on Darfur, probably because its own leaders might also face accusations.

Lt. Gen. Mohamed Hamdan, a powerful figure in the transitional government, leads the paramilitary Rapid Support Forces, a group linked to some of the worst atrocity accusations in Darfur.

When Mr. al-Bashir, a brigade commander, took over in 1989, the country was sinking into decline. The army was battling a tenacious uprising in the south, and Mr. al-Mahdi’s elected government was unpopular and beleaguered.

After he seized power, Mr. al-Bashir suspended the Parliament and other state institutions, closed Khartoum airport and announced the coup over the radio. Later, he embarked on a vicious purge of potential rivals, imposed Islamic law, and introduced harsh laws that severely restricted freedoms for Sudanese, especially for women.

It quickly became clear that the ideological drive for the putsch came from a small group of Islamists led by Mr. al-Turabi, an erudite, Sorbonne-educated cleric who dreamed of leading a Pan-Arab Islamist renaissance. Mr. al-Bashir had a reputation as a malleable, less sophisticated figure.

“Bashir was the frontman but the Islamists were more powerful,” said Alex de Waal, a professor at the Fletcher School of Law and Diplomacy at Tufts University, and an expert on Sudan. “They manipulated him.”

But Mr. al-Bashir outwitted the ideologues in a series of power struggles that ended with Mr. Turabi’s imprisonment in 1999, leaving Mr. al-Bashir as Sudan’s unchallenged ruler.

Sudan was home to Osama bin Laden until 1996, when under American pressure Mr. al-Bashir was forced to expel the Qaeda leader. Later, Mr. al-Bashir softened his Islamist fervor in favor of repairing relations with Sudan’s neighbors and, in 2005, striking a landmark peace deal with southern rebels that led to independence for South Sudan in 2011.

Mr. al-Bashir’s iron grip collapsed in April 2019 when, after months of street protests triggered by the price of bread, his own army lieutenants decided his rule had become untenable and ousted him from power.

Mr. al-Bashir has dismissed the charges over the 1989 coup as politically motivated — “a political trial par excellence,” one of his lawyers told reporters in December — and footage of Tuesday’s proceedings broadcast on state TV focused on the judge and did not show the ousted autocrat in the packed courtroom. For many Sudanese, though, it was also striking to see the former vice presidents Ali Osman Taha and Bakri Hassan Saleh on trial.

Without hearing statements or arguments, the judge adjourned the trial until Aug. 11, when he said it would reconvene in a larger courtroom with more space for relatives and the defendants. 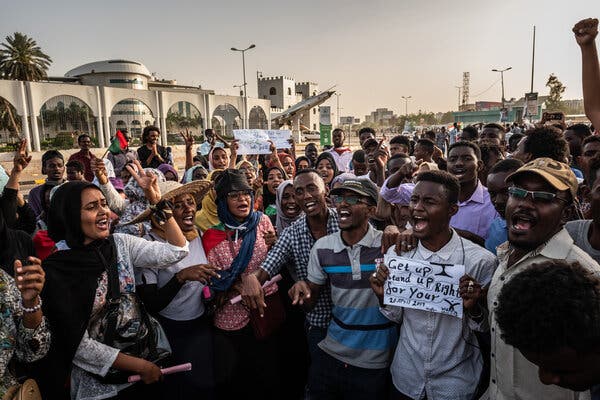