Storage Units Are Standing By

Before Tiffany Shu, 25, left New York in late March, she spent two days in her East Village apartment frantically boxing up clothing, accessories and kitchen items, and preparing her mattress and a mirror for storage.

With growing concern about the coronavirus pandemic, Ms. Shu’s parents, Patty Shu, 56, and Jesse Shu, 62, of Anaheim, Calif., urged their daughter to come home. “Everything was so uncertain. I kept feeling this pressure,” said Ms. Shu, who is a graphic designer for the beauty brand Amorepacific. On top of that, Ms. Shu’s lease expired on May 1 and her roommates would not renew. “The best option for me was to pack up my life, and find movers to help me move everything into a storage unit,” she said.

Since returning to New York on June 1, Ms. Shu has been renting a furnished apartment month-to-month on the Lower East Side. To this day, her belongings remain at Manhattan Mini Storage in Chelsea. The move last March cost $280 (plus a $60 tip). Her 5-foot-by-6-foot-by-8-foot unit costs $124 a month. She got a third month free after signing up for two months of storage.

Across the country, as people were deciding last spring whether they wanted to shelter with family or friends in other towns and states, they often were also having to grapple with what to do with their apartments and all of their possessions. With an end date on the crisis completely uncertain, and for some, with a lease renewal looming, renting a storage unit has become a welcome option.

And, since there are about 50,000 storage facilities in the U.S., they have become a solution to at least some problems.

With five facilities in New York and New Jersey, Dumbo Moving + Storage serviced 2,650 new storage customers in May, up 35 percent compared to May 2019. “Some customers were in a state of panic because they needed to move out,” said Lior Rachmany, owner and chief executive of Dumbo Moving + Storage. “Many customers moved out of state’” and left their belongings behind.

Because of the uptick in storage requests this spring, the company’s buildings in Brooklyn, Newark and East Rutherford, N.J., reached capacity by late June. The Dumbo facility in Maspeth, N.Y., still has availability, as does the 220,000-square-foot facility in East Orange, N.J., which the company bought in response to high demand caused by the pandemic.

Even without a pandemic, there is routinely enough turmoil in people’s lives that the storage business attracts customers. “Death, downsize, divorce and disaster” keeps the storage industry afloat during economic recessions, “because those events are going to happen no matter what,” said Rahul Gandhi, a founder and chief executive of MakeSpace, a storage service in 31 cities including New York, Seattle, Nashville and Dallas.

MakeSpace sends professional movers to pick up, transport and store items in the company’s warehouses. Before pickup, MakeSpace can provide free packing kits or clients can use their own boxes to store property. Customers digitally track pickups, access photo inventories of their items and retrieve stored belongings on demand without ever visiting the storage warehouses in person.

Previously, MakeSpace would pick up items from inside the home or apartment, but now they offer curbside pickup at the residence to eliminate face-to-face interaction. (In a few instances where curbside pickup is not possible, MakeSpace will enter the home while all parties wear masks and maintain six feet of social distancing.)

The reasons for obtaining storage space may differ from person to person, but recent health concerns are the same for consumers, storage companies and their employees. Precautions directly influence the way brands conduct business. Within its storage warehouses, MakeSpace frequently sanitizes shared surfaces to ensure cleanliness.

Oscar Madriles, 25, a driver for MakeSpace in Los Angeles, wears a mask and gloves on the job and carries wipes and hand sanitizer. His truck is also sanitized on a weekly basis.

These days, it is not unusual for storage arrangements to be made not just in a hurry but over the phone.

Sonya Matejko, 29, paid $500 (and a $130 tip), when she remotely hired two Simply Moving movers to pack up everything in her Upper East Side apartment and deliver her belongings to CubeSmart Self Storage in North Bergen, N.J.

Ms. Matejko, who is a communications consultant, left New York on March 13 to quarantine with her parents in Tampa, Fla. Her lease expired on April 30 and she was unsure if she would be able to return to New York before then.

“I just had to do everything remotely and trust that everything was going to work out OK by providing approvals via phone,” said Ms. Matejko, who has paid about $75 month-to-month for a climate-controlled 5-foot-by-12-foot-by-8-foot unit since April.

Many storage companies provide units on a month-to-month basis, with prices ranging from $77 to $561 in New York (or $50 to $233 across the U.S.), depending on details like size and geographic location, said Chris Nebenzahl, a Denver-based research director at Yardi Matrix, which tracks storage-unit rates for U.S. based facilities of at least 25,000 square feet.

Pricing also depends on services provided such as climate control, hours of access, proximity to the facility’s doors and elevators, and the level of security provided. Mr. Nebenzahl said customers might get a free month for longer leases (rather than a lower price, because many operators increase the rent every six months).

However, the national average price of self-storage units was down by 4 percent in June, compared to the same month last year, Mr. Nebenzahl said. “Rates dropped quickly after Covid hit, as many operators wanted to fill up their vacant units. The economy was on shaky ground and demand for storage was unknown, so to attract tenants, owners wanted to offer the best rates possible.”

That price drop isn’t necessarily a comfort for people who never thought they were going to have to pay for a storage unit in the first place — especially since it is an expense that likely doesn’t have a specific end date.

For students attending Connecticut College in New London, Conn., spring break began on March 6, the same time on-campus housing closed for the break. Gabriel Josephs, 20, a sophomore psychology major, spent the time off at his childhood home in Manhattan rather than flying to Puerto Rico for a tennis tournament, which was canceled because of the pandemic.

Campus housing was previously scheduled to reopen after the break on March 23. Instead, an email from the school instructed Mr. Josephs to collect his belongings from his on-campus residence at Harkness House by that date. While some colleges provide free storage on campus, Mr. Josephs had to scramble for a place to store a rug, refrigerator, microwave and clothes. Ever since, Mr. Josephs has been renting a 5-foot-by-5-foot-by-8 foot CubeSmart Self Storage unit near school in Gales Ferry, Conn., month-to-month. “I was hoping a friend would split it with me because $51 felt pretty steep,” he said.

For three months, Mr. Josephs was unsure if campus would reopen in the fall. He described his vulnerability to indefinite storage fees as “a nerve-racking experience.”

On June 22, Mr. Josephs received communication from Connecticut College, which is scheduled to start in-person classes on Sept. 1. “I’m still not completely convinced the plan will follow through,” said Mr. Josephs, who relocated to East Hampton, N.Y., in late June.

But despite his skepticism, Mr. Josephs feels excited and hopeful. If all goes well, he’ll move his belongings out of storage in August. 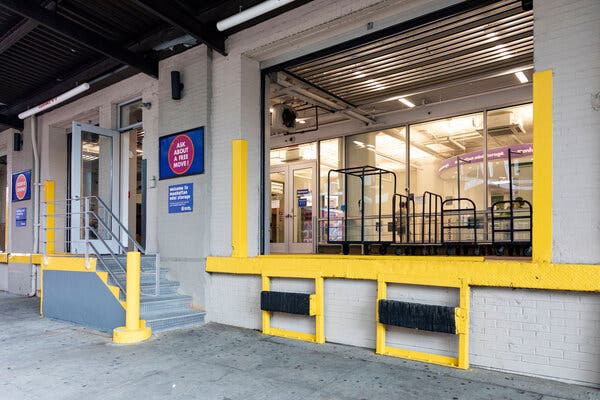