MUNICH — It seems safe to say that right now, there is more live theater being performed in Germany than anywhere else on earth.

After a spate of hastily devised productions that used coronavirus-driven social distancing and hygiene restrictions to achieve heightened levels of intimacy and immersion, ensemble theaters here are back to presenting regular repertoire, albeit at extremely limited capacity. Audiences have gotten used to wearing masks while moving around and to forgoing intermissions and refreshments. These regulations will most likely remain in place for the foreseeable future.

In the closing weeks of this truncated German theatrical season, a number of playhouses hosted productions that treat antiheroines with unusual sympathy and understanding. Seen together, they form a panorama of tyrants, femmes fatales and child killers.

“I hate to disappoint you, but I’m not going to get naked,” the Swiss actress Liliane Amuat announces at the start of Bastian Kraft’s deconstruction of Frank Wedekind’s “Lulu” plays. “Of course, you’re free to imagine me naked,” she continues wryly, “Just as I am free to imagine you naked. I’ve been doing that all along, by the way.”

In this elaborate chamber production for Munich’s Residenztheater, a spirited trio of actresses portray Wedekind’s complex heroine, a dramatic figure who has never been equaled in her uneasy mixture of debauchery and innocence.

Joining Amuat onstage for most of the evening are Juliane Köhler and Charlotte Schwab. They all don tuxedos with tails to bring Lulu’s lurid tale to life in a composite performance that includes philosophical addresses to the audience and precisely timed interactions with multimedia elements. Among these are prerecorded videos featuring the actresses as the various men in Lulu’s life and shadow plays where the live performances surreally blend with silhouettes and offstage voices.

While interrogating Lulu’s status as a crucible of male desire, Kraft also insists on her autonomy. Wedekind’s Lulu meets her end as one of Jack the Ripper’s victims. In his production, Kraft liberates her from this fate by not showing us her murder. “Of course, you’re free to imagine my death, the same way I’m free to imagine yours,” Schwab defiantly announces at the end of the evening.

On German stages, new and recent plays often take a back seat to reworkings of classic texts. The Schauspiel Stuttgart became one of the few places to see a contemporary play this summer when it revived Theresia Walser’s 2013 work “I Am Like You, I Love Apples” in early July.

The title, taken from a quote attributed to Col. Muammar el-Qaddafi, the former Libyan dictator, signals Walser’s intention to give a humorous gloss to a “banality of evil” theme. While waiting for the news conference to begin, the women reflect on their lives, offer justifications for the roles they played in repressive regimes, and brag about their encounters with Stalin, Mao and Castro.

Much of the play’s focus is on Margot (Christiane Rossbach), unrepentant after decades of exile. She is a true ideologue and comes across as both fiercer and more bitter than the paranoid Leila (played by Paula Skorupa as something of a ditsy brat) and the boastful Imelda (Anke Schubert, withering and imperious). While her counterparts discuss which actresses should play them in a film, Margot declares that she is “unrepresentable.” She mocks democracy’s version of freedom. “Is the world really any better off after the ‘end of history’?” she queries. Asked about her political crimes, she flatly responds: “We had enemies. I have nothing to apologize for.”

Facilitating much of this dialogue is Margot’s German interpreter, Gottfried (a nervous and stealthy Sven Prietz), who initially tries to maintain the peace. He starts by mistranslating some of the more combative and insulting comments and ends up manipulating these master manipulators. The play goes off the rails during a screwball climax involving the mortal remains of one of the dictators. By this point, however, Walser has provided vivid characterizations of these infamous women as well as a provocative discussion of both the ideological underpinnings and banal everyday considerations of running a dictatorship. If “I Love Apples” refuses to paint its protagonists as arch villainesses, it doesn’t exonerate them either.

The protagonist of Euripides’ “Medea” is likely the best-known tragic female character in all of literature, and her crime still makes the blood run cold. Markus Bothe’s new staging for the Schauspiel Leipzig is one of only a handful of productions that have premiered post-lockdown. It looks amazing, but doesn’t succeed in conveying the emotional or psychological weight of a play that actors and audiences have grappled with for 2,500 years.

More than any individual performance, the set itself is the star of the evening. The set designer Kathrin Frosch’s shimmering, water-filled stage and Jörn Langkabel’s focused lighting provide the bulk of the psychological characterization.

For much of the performance, Medea’s two sons play with a toy ship, passing it back and forth across the shallow water that covers the entire stage and ripples whenever actors wade in it. When the pool is still, it becomes a dark mirror in which the actors are reflected. An oblong house, enclosed in glass, rotating in the middle of the shallow pool symbolizes the land that Medea has been banished from.

It was frustrating to find such bold stagecraft ill-matched by the acting. Anne Cathrin Buhtz’s Medea was enraged to a fault, and she often gave her character’s fury and bile too much emphasis. In aiming for steely rage and proud anger, she delivered an erratic performance in a quivering, broken voice.

Denis Petkovic’s Jason was most convincing in his early scenes with his matter-of-fact arrogance and callousness. The quiet anguish of his final scene, in which he learns of his children’s murder, was curiously dispassionate and fell flat.

I found myself wondering whether the production’s shortcomings might have had to do with a hurried development schedule that didn’t leave Bothe and his cast sufficient time to explore the characters.

When a production of “Medea” succeeds, it disturbs us with special force because we come to understand how a mother could be driven to murder her children. Examining such evil might just be too terrible for many to contemplate. But trying to make sense of the shocking and the reprehensible isn’t the same as endorsing it. Nor does putting a human face on monstrous figures, real or imaginary, let them off the hook. Euripides could have told you that thousands of years ago. 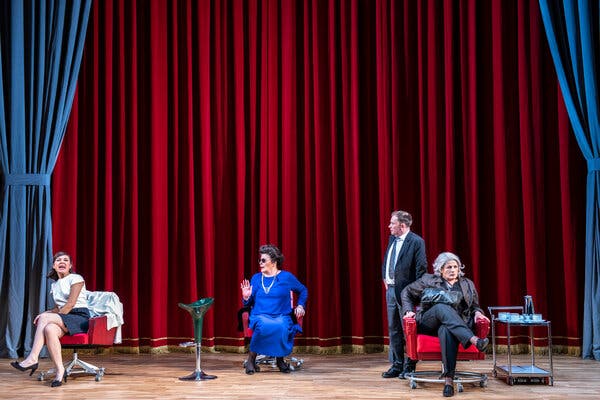