A large takeout order from a KFC in Australia led the police to more than a dozen people hiding at a house party and more than 26,000 Australian dollars in Covid-19 fines, the authorities said Friday.

Chief Commissioner Shane Patton of the Victoria police announced the hefty fine at a news conference, saying that 16 people had broken coronavirus restrictions by attending a surprise birthday at a home in Dandenong, a suburb of Melbourne.

The authorities in Victoria State recently imposed new lockdown orders, following a surge in coronavirus cases, and have sought to enforce them with severe fines. The police said they were tipped off to the party after two ambulance workers inside a KFC in Dandenong noticed other customers placing an unusually large order.

“They saw two people in there and they were ordering 20-odd meals at 1:30 this morning,” Commissioner Patton told reporters at the news conference Friday. The pair spoke to employees at the store, and the police were notified.

The officers obtained the registration of the vehicle used by those people, which they followed to a townhouse, Commissioner Patton said.

Inside, they found two people asleep and 16 people hiding in the backyard, garage and under beds. Commissioner Patton said that the KFC meals were for a birthday party, and that the police issued 16 infringements.

Each fine was for 1,652 Australian dollars, or about $1,150, said Belinda Batty, a media officer for the Victoria police.

“That is absolutely ridiculous, that type of behavior,” Commissioner Patton added. “That’s $26,000 that birthday party is costing them. That’s a heck of a birthday party to recall, and they’ll remember that one for a long time.”

The infringements were among 60 fines issued to people over a 24-hour period for breaching the recent orders of the state’s chief health officer. Recipients of those fines included “four sex workers” at one address, Commissioner Patton said, and drivers at checkpoints across the state. And there were almost 1,000 spot checks on people at homes, businesses and public places across the state.

“This type of conduct, this type of blatant, obvious, deliberate disregard for the chief health officer’s guidelines, we will be enforcing,” the commissioner said.

The authorities around the world have struggled to enforce lockdown rules, and some countries, like Australia, have set financial penalties for breaking them. In Sydney, residents have faced rules that threatened large fines and jail terms. In Israel, people have been fined for going more than 100 meters from their homes, and in the Philippines, security forces have been tasked with maintaining lockdown orders.

The enforcement came after the Victorian government announced on Tuesday that metropolitan Melbourne and Mitchell Shire were returning to more severe stay-at-home restrictions beginning on Wednesday.

The decision was in response to “a significant increase in community transmission of coronavirus” in these areas, the government of Victoria said. As of July 10, there were 288 new cases of coronavirus in a 24-hour period and 1,172 active cases in Victoria. Australia currently has 9,359 cases, according to the government, as a string of outbreaks has threatened to undermine the country’s control of the virus.

The restrictions in Victoria, which affect 32 areas in the state, allow residents to leave their homes for food and supplies, medical care and caregiving, exercise and recreation, and study and work if they cannot do it from home. The restrictions are set to remain in place until Aug. 19. 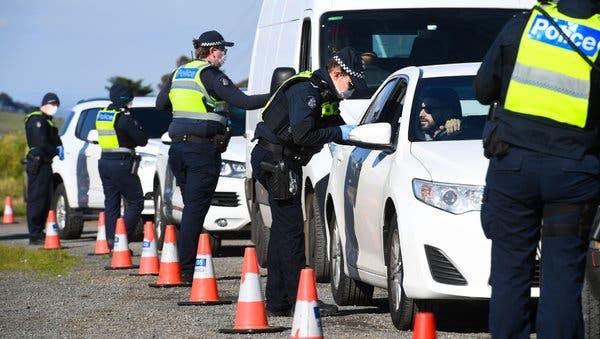