China Will Answer ‘Heavenly Question’: Can It Land on Mars?

Having already joined the upper ranks of spacefaring nations, China is preparing to try its next bold leap: launching an orbiter, a lander and a rover to Mars.

The mission — shadowing NASA’s Perseverance rover and the United Arab Emirates’ Hope orbiter — lifted off on Thursday and aims to place China where its Communist leadership has long wanted to be. China is eager to show that it can manage complex interplanetary missions on its own, and landing on Mars is a difficult accomplishment that only the United States and, briefly, the Soviet Union have achieved before.

“We cannot lie in the cradle of Earth forever,” Bao Weimin, a senior director at the state-owned China Aerospace Science and Technology Corporation, said on state television recently, paraphrasing a Soviet rocket scientist, Konstantin Tsiolkovsky. He called the exploration of Mars “a manifestation of the country’s scientific and technological strength.”

For China, more than pride is on the line. The country’s leader, Xi Jinping, has made space exploration a pillar of the country’s development in the decades ahead, with an assortment of missions planned through the middle of the century, many involving human crews.

The mission is called Tianwen-1, or “Questions to Heaven” after a classical Chinese poem (also sometimes translated as “Heavenly Questions”) from the 3rd century B.C. The vessel, weighing more than five tons in all, includes an orbiter that will circle the planet for a Martian year — 687 days — and conduct its own scientific observations. It will also serve as a relay for communications to a lander and rover that two or three months after arriving in orbit in February will try to descend to the planet’s surface.

While the United States has reached all these milestones, China is trying to do them all at once. “Tianwen-1 is going to orbit, land and release a rover all on the very first try, and coordinate observations with an orbiter,” four scientists involved in the program wrote last week in the journal Nature Astronomy.

“No planetary missions have ever been implemented in this way,” they added. “If successful, it would signify a major technical breakthrough.”

The orbiter will carry seven instruments, including cameras, a subsurface radar, a spectrometer, a magnetometer and particle analyzers to conduct what they called “a global and extensive survey of the entire planet.”

The lander — which, at 530 pounds, is nearly twice the mass of the rovers China sent to the moon — has six instruments that it will employ over 90 days on the surface. They include ground-penetrating radar to study the planet’s geology and search for potential underground reservoirs of ice — a key to sustaining an extended human presence in space. The main candidate for a landing site, the scientists said, is Utopia Planitia, a 2,000-mile wide basin where NASA’s Viking 2 landed in 1976.

Tianwen-1 is lifted off on Thursday from the Wenchang Space Launch Center on Hainan, the island off China’s southeastern coast. The center, which launched its first rocket in 2016, was selected to take advantage of its comparatively lower latitude than those of China’s other launch sites.

This will not be China’s first attempt to travel to Mars. That one, in 2011, ended in failure, though not one of China’s own making. It built an orbiter, Yinghuo-1, that was piggybacking on a Russian mission to Phobos, one of the Martian moons, but the Russian rocket stalled in low-Earth orbit, crippled by faulty computer circuits. The two spacecraft eventually plunged back to Earth.

In the years that followed that setback, China has racked up a number of impressive spaceflight accomplishments.

On three occasions, China’s astronauts have docked in orbit with space stations of the country’s own construction. And twice it has landed robotic rovers on the moon, with its latest mission reaching the lunar far side, a feat never before accomplished by any space program. That rover continues to roam, and its ground-penetrating radar has deepened understanding of the lunar surface.

Namrata Goswami, an independent analyst and author of a forthcoming book, “Great Power Competition in Outer Space,” said that the Chinese were systematically building strategic and logistical capabilities in space with a geopolitical goal in mind.

Last month, for example, China launched the last of the satellites needed to establish a global positioning system, called Beidou, which it plans to offer to countries as an alternative to the American GPS and other countries’ navigation systems.

“The Communist Party of China wants to prove to the world that they are actually a legitimate alternative to a U.S.-led space order,” she said.

Mr. Bao, from the China Aerospace Science and Technology Corporation, even floated the idea last year that China could create an economic zone in space by the middle of this century, one that could contribute $10 trillion to the Chinese economy.

In the nearer term, China plans to launch another lunar lander at the end of the year, which will return samples from the moon for the first time since the Apollo missions, and complete its third orbiting space station as soon as 2022. It hopes to gather samples for return to Earth from Mars by 2030 — setting up a race with a joint project by NASA and the European Space Agency with the same goal.

“For the Chinese, space touches on all the strands of comprehensive national power,” said Dean Cheng, an expert on China’s space program with the Heritage Foundation in Washington, D.C.

The Mars mission could also be useful in other geopolitical arenas.

The timing of the launch comes at a moment when China is facing increasing international pressure over its handling of a variety of issues. They include the coronavirus pandemic, which spread from Wuhan, a city of 11 million in central China, early this year; the systematic and ongoing repression of Uighurs and other Muslims in its Xinjiang province; and the harsh crackdown on dissent in Hong Kong, the semiautonomous territory whose political and economic freedoms China promised to respect until 2047.

A mission to Mars might seem like a golden opportunity to change the topic. At the same time, the country’s promotion of the journey has been relatively restrained compared with the fanfare of NASA missions. That is in keeping with a tradition in China, where its human space missions were broadcast only a tape delay.

The space program remains closely linked with China’s military, which leaves a partial shroud of secrecy over the preparation and operational details of missions. Fear of failure also remains a powerful factor in the management — and publicity — of its space program.

China’s previous leader, Hu Jintao, ultimately wrapped himself in the country’s successful astronaut missions, beginning in 2003, but Mr. Xi has been far more careful with his public embrace of the Mars mission. This is in contrast to the way that the prime ministers of India and Israel were both directly involved in those countries’ moon landing attempts last year — only to see them fail.

Still, the country recently broadcast its final Beidou launch on national television, though with a delay. As the launch approached, anticipation of the Mars mission built in state media and online.

The success of China’s Mars mission depends on the Long March 5, a launch system that suffered a catastrophic failure in 2017, prompting a two-year delay for redesign and testing and pushing back other deep-space missions. The Long March 5 was successfully launched again in December, clearing the way for the Mars mission this month.

“There is a lot riding on this,” Mr. Cheng said.

“Failure is always a possibility, and the Chinese themselves write about how space is one of the most complex environments to work in,” he added. “But that does not mean they will accept failure gracefully.”

The mission has already suffered the loss of one of its architects, Wan Weixing, who died in May before seeing the program reach its climax. Mr. Wan, the chief scientist for the Mars exploration program and one of the co-authors listed on the Nature Astronomy article, was 61, according to China Daily. No official cause of death was cited; tributes from his students said he had fallen ill in 2017 but continued to work on the program.

Only the Soviet Union and the United States have managed to arrive in one piece on Mars. The Soviet lander, the first, touched down in 1971 but stopped communicating almost immediately afterward. While a number of similar missions by other countries have failed, the United States has managed five successful surface landings.

“The Chinese are acutely aware that a lot of people think they are just repeating what others have done in the past,” said Joan S. Johnson-Freese, a professor of national security affairs at the United States Naval War College.

“So they are very careful to do things that No. 1, get them in the record books, like landing and the far side of the moon and, No. 2, allow them to do science that others countries are going to be interested in,” he said.

NASA’s experience allows it greater ambitions. The Perseverance rover, for instance, will carry a helicopter on board, attempting for the first time to fly in the exceedingly thin Martian atmosphere. It will also gather samples for eventual return to Earth.

“The United States is all about building a Mercedes,” Dr. Johnson-Freese said. By contrast, she added, the Chinese program, “is all about just running a Ford. They don’t have a lot of bells and whistles.”

Still, for China, if all goes according to plan, and Tianwen-1 arrives on Mars in February, a stream of images from the planet will at least compete with those coming from Perseverance, which is scheduled to land in February. That will be a publicity coup in itself. Even if China is still playing catch-up, it is trying what no other nation has been able to do except the United States, Dr. Goswami said.

“China realizes that in the world of today and the world of tomorrow, space is going to play a critical role in how humanity organizes itself,” she said, “and so they are looking at all of their missions from that perspective.” 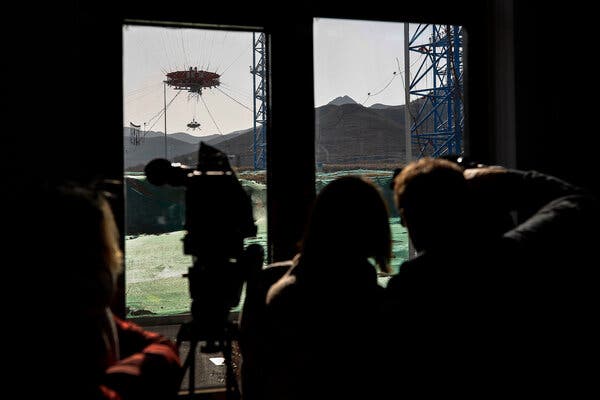