Brazil Health Workers May Have Spread Coronavirus to Indigenous People

RIO DE JANEIRO — The telltale symptoms began in late May, about a week after government medical workers made a routine visit to the Kanamari Indigenous community in a remote part of the Amazon: Elderly members of the group were struggling to breathe.

For months, as the coronavirus tore through Brazil, the Kanamari had sought to shield themselves from the pandemic by strictly limiting access to their riverside villages in the secluded Javari Valley, one of Brazil’s largest Indigenous territories.

But it seemed even there, the virus had reached them. Panic set in.

“Many people grabbed some clothes, a hammock and ran into the forest to hide,” said Thoda Kanamari, a leader of the union of Indigenous peoples in the vast territory, home to groups with little contact with the outside world. “But it was too late, everyone was already infected.”

And the vectors of the disease, according to interviews and federal data obtained by The , may have been the health workers charged by the federal government with protecting the country’s Indigenous populations.

More than 1,000 workers with the federal Indigenous health service, known as Sesai, have tested positive for coronavirus as of early July, a freedom of information request and interviews with union representatives found.

Working without adequate protective equipment or access to enough tests, these workers may have inadvertently endangered the very communities they were trying to help, medical workers and Indigenous leaders said.

More than 15,500 Indigenous Brazilians have been diagnosed with the coronavirus, including at least 10,889 living in protected territories, according to Instituto Socioambiental, an Indigenous rights organization. At least 523 have died.

In the sparsely populated Javari Valley, in northwestern Brazil, the federal Indigenous health care agency said it had identified 220 cases and one death.

Robson Santos da Silva, the Army colonel at the head of Sesai, defended the agency’s response during the pandemic, and brushed off criticism as “a lot of disinformation, a lot of politics.”

“We’re on the front lines,” he said. “We’re battling this disease daily.”

In an emailed statement, Sesai said reports that health workers had exposed Indigenous people to the virus were “inconclusive.” The agency said its employees were outfitted with protective equipment.

“All this planning and early research led to timely and efficient care that was delivered in villages,” the statement said.

But The Times found that in at least six field offices, the share of infected workers was above the Amazon region’s average of 8 percent for the general population. Two field offices in particular had extraordinarily high rates of infection, according to tallies compiled by health care unions.

The office overseeing the state of Amapá and the northern part of the state of Pará reported that 186 people — almost half of its health workers — had tested positive for the virus. And in the office covering the Yanomami community, which straddles the border between Brazil and Venezuela, 207 workers — more than 20 percent of the medical staff — became infected.

Representatives of the health care workers’ union and experts say the true caseload among the federal Indigenous health workers is likely much higher. Many of those on the front lines have sought tests on their own, but as of June 30, the Indigenous health service had only tested 1,080 of its employees, roughly five percent of its work force.

The large share of infected workers suggests “there were failures in the protection of health care workers at a critical moment, affecting teams that care for a highly vulnerable population,” said Felipe Tavares, who researches Indigenous health at the Federal Fluminense University.

Health care workers, Indigenous leaders and experts described a bungled response beset by the broader shortcomings that have turned Brazil into a global epicenter of the pandemic. Brazil has recorded 78,772 coronavirus deaths and more than two million confirmed cases as of Sunday — numbers that are second only to the United States.

Tests have been in short supply and often unreliable, which means some doctors and nurses with asymptomatic or undiagnosed cases have traveled to vulnerable communities and worked in them for days. Some teams have had to procure their own masks and other protective gear.

Lax and poorly-communicated quarantine protocols, and the absence of effective contact-tracing, have allowed the virus to spread with ease among people living in close quarters.

Indigenous leaders said it’s impossible to determine with certainty how many cases were introduced by health care workers. Some Indigenous people may have brought the virus into their communities after traveling to cities to gather supplies and emergency government aid. Illegal miners and loggers who operate in Indigenous territories may also have exposed some communities.

Luiza Garnelo, a doctor and anthropologist at Fiocruz Amazônia, a government health research agency in the Amazon, said the pandemic had exposed the defenselessness of communities that had already been grappling with substandard medical care, poverty, and often violent land invasions.

“Long before the epidemic hit, investment in Indigenous health care was insufficient and the resources that are available were not harnessed in a way that enabled an effective response to the epidemic,” she said. “The Indigenous population is socially and economically vulnerable.”

Some communities pleaded for more robust medical care as the pandemic gripped Brazil.

But at least 90 of the 131 health care workers assigned to Boa Vista during the outbreak have tested positive, according to Mr. Yanomami. They were, unwittingly, among the primary vectors for infection of the 262 Yanomami people who have been diagnosed with the virus, he said. Five of the Yanomami have died.

When Mr. da Silva, the Army colonel who heads the Indigenous health agency, flew to several Yanomami villages in late June to deliver protective equipment and administer tests, tribal leaders said, they felt like they were being used for photo ops.

“We want the government to help Indigenous peoples, as it is their obligation to do, but not like this,” Mr. Yanomami said.

Carmem Pankararu, the president of the Indigenous health care workers union, said workers were hobbled by a bureaucracy that was slow to get tests and critical supplies to regions where transportation and logistics are extraordinarily hard even in normal times.

“They would only test when we showed symptoms,” she said. “We needed mass testing.”

Criticism of President Jair Bolsonaro’s handling of the pandemic, within Indigenous territories and beyond, is mounting.

After losing two health ministers who were physicians, in April and May, Mr. Bolsonaro put the health ministry in the hands of an active-duty Army general, who has filled the ministry’s senior ranks with military officers who are not experts in health care.

Early this month, a judge on Brazil’s Supreme Court ordered the government to redouble efforts to shield Indigenous people from the virus by coming up with a comprehensive plan within 30 days and setting up a “situation room” staffed by officials and Indigenous representatives.

More recently, another Supreme Court judge generated consternation in the Bolsonaro administration by warning that the armed forces could be held responsible for a “genocide” over their handling of the pandemic in Indigenous communities.

Several Sesai workers who spoke to The Times on condition of anonymity, fearing retaliation, described an exceptionally challenging mission, impaired by poor guidance, mistrust from many Indigenous communities and a scarcity of tests.

Enoque Taurepang, the coordinator of the Indigenous Council of Roraima, said doctors and nurses had been set up for failure.

“You can’t blame health professionals because they didn’t have the tools necessary to act,” he said.

Meanwhile, the losses to the Indigenous mount.

“My grandfather was editing a Kokama dictionary. He was one of the few who still spoke it,” he said. “We’ve lost so much knowledge.” 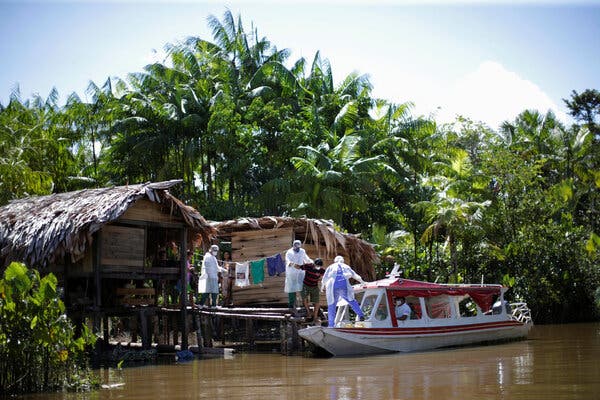