At Magazzino, Social Distancing Devices Vibrate. So Does the Art.

COLD SPRING, N.Y. — I’ve been cheating, and it’s likely you have been too: Six feet apart is a lot farther away than most people seem to hope it is.

I know this because at the recent reopening of Magazzino Italian Art, the museum of postwar and contemporary work here in the Hudson Valley, I wore a piece of social-distancing hardware called an EGOpro Active Tag. It was attached to a lanyard around my neck.

The tag is required for all visitors, and it’s programmed to vibrate for a few seconds every time the wearer is closer than six feet to a tag worn by another person.

Mine buzzed a lot.

I misjudged my spacing quite a few times, and the incessant buzzing was annoying. But that’s the point, of course. It made me retreat, and quickly.

“The technology makes a lot of sense to me,” said Harry Wilks of Plattekill, N.Y., one of the visitors I encountered. “It would make even more sense on the weekend, when it’s more crowded.”

My interviews weren’t exactly helping the situation. Mr. Wilks added, “Mine didn’t go off until you came up to me to talk.”

Magazzino, founded in 2017 by the collectors Nancy Olnick and Giorgio Spanu, is the first museum in the United States to use the technology.

That Magazzino takes pandemic safety seriously is clear from the beginning of a visit there. Temperature checks are now required for all visitors, administered in a little tent outside the entrance. “Nobody’s fussing about it so far,” said Jay Nicholas, a visitor services assistant, who took mine. Masks are required, too.

The museum, which was closed for four months, is admitting 10 people per half-hour via advance reservation, and it assumes a 90-minute visit. It could have more visitors, according to state and county guidelines, but they decided to start cautiously.

“We wanted to find a way to have a new normal,” said Vittorio Calabrese, Magazzino’s director. “Art does not stop.”

It was roomy and very quiet inside the high-ceilinged white galleries, arranged in a ring; the 20,000-square-foot building was designed by the Spanish architect Miguel Quismondo. In galleries four and five, of eight, there are several artworks that incorporate neon, and I could distinctly hear the neon humming.

Highlights from the collection assembled by Ms. Olnick and Mr. Spanu fill most of the galleries, part of an ongoing exhibition called “Arte Povera,” dedicated to the Italian movement of the same name from the 1960s and ’70s, when pioneering Italian artists voiced their dissent about the direction of society.

The collection shows how Arte Povera encompassed many different media and styles, with a conceptual approach that frequently addresses nationality, immigration and geography; some of the practitioners worked until very recently, or are still at it.

The current selection starts in the lobby, with Mr. Pistoletto’s reinterpretation of the Italian tricolor flag, made with rags, “Stracci italiani” (2007). Inside the galleries, his cheeky “Adamo ed Eva” (1962-87) is a portrait of a naked couple on polished stainless steel, so that the viewer can’t help but enter the picture when standing in front of it. At 87, he is still working.

Mr. Boetti (1940-1994) is represented by several works, including “Mappa” (1983), an embroidered work that he commissioned Afghan artisans to help him make, and “Pannello luminoso” (1966), a Color Field-style red rectangle.

Scattered throughout are works by Mr. Kounellis, who died in 2017, on the theme of travel and on the journey of memories. He gets his own dedicated gallery, too. It has a 1960 untitled painting mixed with several later sculptures in steel and iron (one of them incorporates coffee, which you can smell before you get to it).

Ms. Merz — the only prominent woman in the group, who died last year — is represented by several pieces including “Senza titolo (Untitled),” a 2009 small, upward-facing head on a pedestal. Made of raw clay, it almost appears to cry and retains traces of the artist’s touch around the eyes, nose and mouth.

Now, there’s also a special show, “Homemade,” in the last gallery, featuring work made by eight Italian artists quarantined in New York during the pandemic. It began as an online and Instagram invitational, and morphed into a real exhibition.

He added, “Some of these artists had to deal with a lot of anxiety and stress. And the common sentiment was that this kept them going. We called our regular video meetings ‘Zoom apperitvi.’”

One of the artists in “Homemade,” Alessandro Teoldi, was on site when I visited. To keep our buzzers calm, we circled each other at a remove as we chatted.

Mr. Teoldi, who hails from Milan and lives in Brooklyn, talked about his 2020 piece “Untitled (Delta, Norwegian, COPA, Lufthansa, Thomas Cook Airlines, Hawaiian and Iberia),” which is an abstract assemblage of stretched airline blankets that looks from afar like a painting. He made it just before the pandemic hit.

“I buy them on eBay or I steal them when I travel — or when I used to travel,” Mr. Teoldi said. I think his phrasing made us both a little wistful.

His commissioned works, a series of four reliefs called “Untitled (hug),” gets at an essential feature of the pandemic — the lack of physical intimacy. The four panels, cast in cement after starting out as a paper collage, all show people hugging.

The material, Mr. Teoldi said, helps underline “being home but not being able to move, stuck in a building made of cement.”

Having a commission to work on “was a great experience for me,” Mr. Teoldi said. “Quarantine was such a scary time.”

The EGOpro Active Tag that was making my viewing of their works extra-safe is an adaptation of technology that has been around for a while, using ultra-wideband radio waves.

The tags were developed by the Italian company Advanced Microwave Engineering, which then partnered with the American company Advanced Industrial Marketing, nicely mirroring the married union of the Sardinia-born Mr. Spanu and Ms. Olnick, who is from New York City.

The technology is currently in use at the Duomo in Florence, Italy, and the Leaning Tower of Pisa.

“Proximity detection was developed to keep people away from machines, for safety,” Rob Hruskoci, the founder of Advanced Industrial Marketing in Indianapolis, told me. “Until March, no one cared about keeping people away from other people.”

Mr. Hruskoci said that two other U.S. museums had purchased the system.

José Pazos, a New York City-based artist who had come up for the day, said that the system worked well for him.

“This is by far the most responsible approach I’ve seen,” Mr. Pazos said. “This is the standard until we have a vaccine. As citizens of New York, we have to protect each other.”

Mr. Spanu and Ms. Olnick were on hand for the reopening — they live about five minutes away in Garrison — and were sitting in Magazzino’s big, open courtyard, around which the galleries circle.

I wondered about the high-tech approach and whether it was somehow out of place, given that Arte Povera — literally “impoverished art” — had commonplace materials as one of its core tenets.

Ms. Olnick had a thoughtful answer.

“Arte Povera artists were expressing their times — the big transitions they all lived through, the freedom and idealism,” she said. “Their motto was, ‘Art is life.’ And this” — she gestured at a small, distanced circle of people all wearing masks and attached to buzzers — “is life now.” 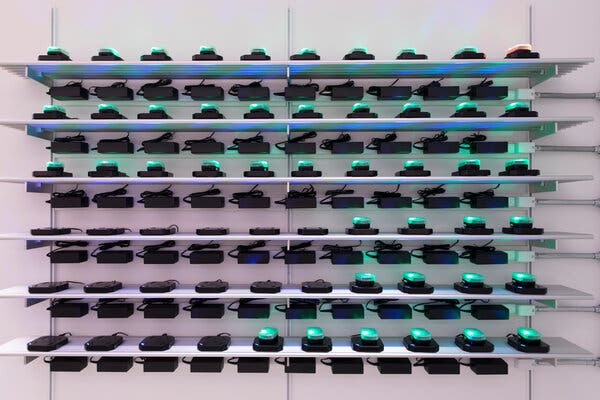