DAKAR, Senegal — When security forces in Mali shot and killed protesters last weekend, they were met with an unexpected response. Instead of being cowed into submission, the demonstrators have become more determined, announcing plans to continue their efforts for reform despite the violent crackdown.

The leaders of the ballooning protest movement in the West African nation have called for mass civil disobedience until President Ibrahim Boubacar Keïta steps down. Thousands are expected to rally at mosques across the country on Friday, to mourn those who were killed and to continue the series of demonstrations that began in early June.

A team of regional mediators arrived in the capital, Bamako, on Wednesday night to try to mitigate the growing unrest, but Mr. Keïta has shown no sign of stepping down.

Malians say those who are in charge have not done enough to address the corruption and bloodshed that have plagued the country for eight years, pulling in regional and French counterterrorism forces as well as American support. Thousands of civilians and soldiers have died. The economic suffering exacerbated by the coronavirus pandemic has only brought more frustration and uncertainty.

The last straw for protesters and their leaders came when the constitutional court overturned the provisional results of a long-delayed parliamentary election held in March. As they saw it, Mr. Keïta had stolen the election and installed his preferred candidates.

“He has failed, and he has to go,” said Cheick Oumar Sissoko, a filmmaker and former minister of culture. Mr. Sissoko is part of the coalition of opposition politicians, religious leaders and civil society organizations that now calls itself the June 5 Movement, or the M5, after the date of the first protest six weeks ago.

Mali has had a rough decade. A crisis that began with rebels and jihadists taking control of the north in 2012 has spread and deepened. Armed Islamist groups, ethnic militias, hunting groups and bandits have destabilized the country’s center. The insecurity has seeped over its southern borders.

National security forces commit rampant abuses in the name of fighting terrorism. An expensive United Nations peacekeeping force is often seen as following an agenda set by the government.

When the crisis began, troops from France, the country’s former colonial ruler, were welcomed with open arms. Now many Malians are calling for them to get out, suspicious of their motives. Despite recently praising each other at a high-level summit for their supposed victories, the French president and leaders from the G5 Sahel, a group of five West African countries that have come together to fight terrorism, have achieved little real progress, analysts say.

All of this has given rise to mounting anger, but until last weekend, before the crackdown, the M5 had seemed ready to negotiate.

Then the atmosphere changed.

The killing of at least 11 protesters was “a red line that should not have been crossed,” said Boubacar Sangaré, a researcher with the Institute for Security Studies in the capital. “There is a convergence of crises and anger,” he said.

Tens of thousands of people had gathered for peaceful protests on June 5 and June 19. But last Friday, the police response was brutal.

Smoke rose from fires that protesters had lit in Mali’s peach-colored national assembly building in Bamako. Malians tuning into state television were greeted with an error message: demonstrators had taken it off the air.

By the end of the weekend, 11 people had been killed, by the government’s count, though the protesters said the toll was higher, and more than 85 people were injured. Ousmane Diallo, a researcher on Francophone West Africa with Amnesty International, said many of those hurt had been shot with live bullets, and he agreed that the official count of the dead could be much too low.

The crackdown was aimed at stopping the demonstrators from being “masters of the streets,” Mr. Diallo said. “They are trying to see if by sheer police repression, they can break down the movement, and show that they are the legitimate authority in Mali.”

Critics of the government were especially outraged by the use of a counterterrorism police unit to quell the protests.

In a joint statement released on Monday, the United Nations, the West African regional bloc, Ecowas, the African Union and the European Union condemned the use of lethal force by the police, and called for restraint.

International mediators, led by the former Nigerian president Goodluck Jonathan, met with Mr. Keïta on Wednesday night, according to local journalists, and then met with M5 movement leaders and supporters, including Mahmoud Dicko, a powerful imam who is a driving force behind the protests.

The prime minister’s office sent a letter on Tuesday to the former security minister, which was leaked and widely circulated on social media, asking why the counterterrorism unit was deployed and who ordered it onto the street. But many Malians say the buck stops with Mr. Keïta, the president since 2013.

There are currently few other places it could land.

Mali has had no functioning government for over a month. The prime minister, Boubou Cissé, resigned in early June to try to form a new government coalition. And though Mr. Cissé was swiftly reappointed by Mr. Keïta, he has not yet been able to form a new administration.

Without an operating government, it will be difficult to determine who could be held accountable for the deaths of protesters. Calls seeking comment from the director-general of the police, Moussa Ag Infahi, went unanswered on Wednesday.

Some M5 leaders have gone into hiding since the crackdown; others were detained and later released. “I was not arrested. I was kidnapped,” the opposition leader Issa Kaou Djim told Malian journalists on Monday, describing how he had been taken from his house late at night.

Rumors that Mr. Dicko, the imam who met with international mediators on Wednesday, would also be arrested led protesters to build barricades around Badalabougou, the neighborhood where he preaches.

Mr. Dicko, who is originally from the northern region of Timbuktu, gained influence over a decade ago as chairman of the country’s High Islamic Council. He resigned last year to become more involved in politics.

“I am not a politician. I never ran for a single term and I won’t start now,” he told the magazine Jeune Afrique. “But if caring about your country and the well-being of its people is political, then yes, I’m political.”

At midnight on Saturday night, the president addressed the nation, dissolved the constitutional court and announced that there would be a government of national unity that included the opposition.

M5’s original list of demands included dissolving both the constitutional court and the national assembly, and downgrading Mr. Keïta’s position to “honorary president,” with a prime minister chosen by M5.

But “you cannot impose a prime minister with full power on a democratically elected president, so that the president becomes like the Queen of England,” said Fatoumata Sako, a campaign official who has worked for Mr. Keïta.

For Mr. Sissoko, the former minister of culture, there were few alternatives beyond the list of demands from M5.

“Demonstrators were killed with live bullets by the counterterrorism forces that should be on the front lines fighting terrorists. Instead, they’re deployed to kill people who demand justice,” he said.

“We’ve arrived at the point of no return.” 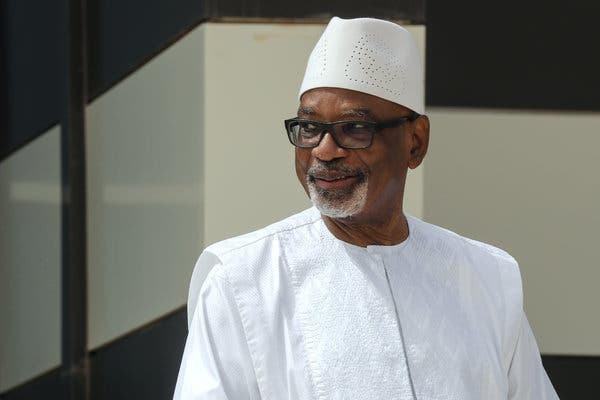