Andrew Mlangeni, Ally of Mandela in Anti-Apartheid Struggle, Dies at 95

Andrew Mlangeni, the last surviving co-defendant convicted with Nelson Mandela in 1964 at the Rivonia Trial, which exposed to the world the harsh segregationist policies of apartheid in his native South Africa and helped define the battles lines in the struggle there against white minority rule, has died in Pretoria. He was 95.

His death was confirmed on Wednesday by the office of President Cyril Ramaphosa, which said Mr. Mlangeni had died overnight at a military hospital after being admitted because of an abdominal complaint.

All eight men accused of sabotage at the trial were given life sentences and served long prison terms. Mr. Mandela’s was the longest, 27 years, until his release in 1990 as South Africa began a remarkable transformation to fully democratic elections in 1994.

Mr. Mlangeni served 26 years as Prisoner 467/64 (Mr. Mandela was 466/64), much of the time on Robben Island; he was released in 1989. Unlike the charismatic Mr. Mandela, who became South Africa’s first Black president, Mr. Mlangeni cast himself in a more self-effacing role.

An official biography, written for his charitable foundation in 2017, was entitled “The Backroom Boy,” a reference to his clandestine activities in the underground resistance and, perhaps, to the language of apartheid, when white bosses routinely referred to adult Black underlings as “boy.”

When Mr. Mlangeni arrived under heavy guard on Robben Island in 1964, he and other Black convicts in the group were issued prison uniforms with short trousers usually reserved for schoolchildren.

(Such were the granular divisions of apartheid that the only white activist among the group, Denis Goldberg, who died in May, was sent to a whites-only prison, while Ahmed Kathrada, a Rivonia co-defendant of Indian descent, who died in 2017, was issued long trousers because he belonged to a different racial group.)

For all his reticence, though, Mr. Mlangeni was in a historic vanguard of opposition to apartheid that turned to violent tactics, starting in 1961 with the creation of a secretive insurgent group called uMkhonto weSizwe, the Spear of the Nation.

According to Mr. Mlangeni’s biography, Mr. Mandela sought him out and selected him to join five other men in the first group of South African anti-apartheid activists to be sent to China for training. (Mr. Mlangeni had to prove his physical fitness by performing push-ups to Mr. Mandela’s satisfaction, according to this account.)

It was a time when a “wind of change,” in the words of Prime Minister Harold MacMillan of Britain, was blowing through Africa, fanning a clamor for independence and majority rule and threatening a palisade of British and Portuguese colonies shielding South Africa.

Faced at home with powerful white-led security forces and an all-pervasive secret police, the would-be freedom fighters played a cat-and-mouse game to avoid detection as they planned their journey to China as representatives of the outlawed African National Congress and South African Communist Party.

Outside South Africa, the activists relied on a network of exiles to arrange passage for Mr. Mlangeni and the rest of the group. Slipping out of South Africa to neighboring Botswana (then called the Bechuanaland Protectorate), they traveled through Tanzania, Sudan and Ghana, flew to Zurich, and then continued on to Prague, Moscow and Irkutsk, in Siberia, before reaching China, according to Mr. Mlangeni in a series of interviews last year with Pippa Green, a prominent South African journalist.

During their training South Africans were amazed to be visited by Mao Zedong, the head of the Chinese Communist Party. Mao “looked me straight in the face and I did the same, trying to be as great a soldier as I could,” Mr. Mlangeni was quoted as saying in his biography.

The South Africans were schooled in bomb-making, secret communications and the Maoist philosophy of insurgency. But their ability to put their lessons into practice proved short-lived.

After he returned to South Africa in late 1962, Mr. Mlangeni joined the insurgents’ high command. He disguised himself as a priestand traveled around South Africa recruiting young people to go abroad for insurgency training. But in June 1963 he broke the rules of his tradecraft by staying at his home in the Dube section of Soweto rather than in a safe house. The police raided it.

Initially, he and a fellow activist, Elias Motsoaledi, were charged with trying to spirit out of the country a group of South Africans, including Jacob Zuma, who would become president in the post-apartheid era. They were acquitted but immediately rearrested under apartheid laws permitting 90 days detention without trial.

The men were subsequently accused of sabotage, as were others who had been arrested in a raid of a farmhouse in the Rivonia district of Johannesburg’s northern suburbs. They faced charges of plotting to overthrow the state, a crime that could have brought death sentences.

The subsequent trial, named for the Rivonia area and beginning in 1963, drew broad international attention. It is often remembered for a stirring address from the dock by Mr. Mandela, in which he evinced his readiness “if needs be” to sacrifice his life for the cause of freedom.

But Mr. Mlangeni also spoke, urging Judge Quartus de Wet to “remember what we, African and nonwhite people, have had to suffer.”

“That is all I have to say,” he said, “except to add what I did was not for myself but for my people.”

Andrew Moeti Mokete Mlangeni was born on June 6, 1925, on a remote white-owned farm near the town of Bethlehem, about 150 miles south of Johannesburg. He was the ninth child of 10 born to Aletta and Matia Mlangeni, a farm laborer who died when Andrew was 6. Mr. Mlangeni had a twin sister, Emma. When he was imprisoned, she died of cancer weeks before his release in 1989. The authorities refused to allow him to attend her funeral.

In later life, Mr. Mlangeni said he had been born in a township near Johannesburg, but this was a ruse to thwart a police practice of sending people they considered troublemakers back to their place of birth.

By all accounts, he started school only at the age of 11 or 12, after the family had moved from the Bethlehem area to nearby Kroonstad, although his father had taught him to read. He worked as a caddy at a golf course in Bethlehem that admitted only white players. But he came to love the game and played it into his 90s.

In 1945, Mr. Mlangeni joined the Young Communist League, which was organized in cells along revolutionary lines. His cell leader was Ruth First, a white communist and anti-apartheid activist killed in 1982 by a parcel bomb that had been mailed by the South African security police while she was in exile in Mozambique.

In 1950, Mr. Mlangeni married June Ledwaba, whom he had met while she was working as a shop assistant in Soweto. She, too, became an anti-apartheid protester, harassed by the security police while her husband was incarcerated. She died of cancer in 2001, shortly after their 50th wedding anniversary.

Mr. Mlangeni is survived by his two daughters, Maureen and Sylvia, and a son, Sello. His eldest son, Aubrey, died in 1998.

The 1950s were a time of ferment and ever greater repression, when the African National Congress, the South African Communist Party and other groups struggled to define the ideological narrative of resistance.

For Mr. Mlangeni, the debate culminated in 1955 with the adoption of the Freedom Charter, setting out a vision of a nonracial South Africa in which its wealth would be redistributed. Mr. Mlangeni called it the “bible that would be used to pursue freedoms for all South Africans.”

The authorities responded with the so-called Treason Trial, from 1956 to 1961, when more than 150 anti-apartheid defendants, including Mr. Mandela but not Mr. Mlangeni, were hauled into court. All were acquitted.

While the trial was going on, the police in Sharpeville, about 40 miles south of Johannesburg, opened fire on unarmed protesters taking part in a demonstration that had been organized by the newly formed Pan Africanist Congress; 69 were killed. The massacre led to a declaration of a state of emergency that outlawed the principal anti-apartheid groups.

By the time the Rivonia trial ended, in June 1964, it was clear that the authorities were bent on crushing the resistance leadership. Once imprisoned, Mr. Mandela became an invisible figurehead in waves of protests that ultimately led to the dismantling of apartheid in the early 1990s.

Mr. Mlangeni became a lawmaker in 1994 in the newly created multiracial Parliament but retired after a single five-year term.

He continued to exert influence as head of an African National Congress committee charged with maintaining the party’s integrity. According to his interviews in 2019, he frequently urged President Jacob Zuma, his former comrade-in-arms, to resign in the face of sweeping corruption charges. Mr. Zuma was forced from office in 2018.

But Mr. Mlangeni always resisted the notion that he might be a figure of public influence. 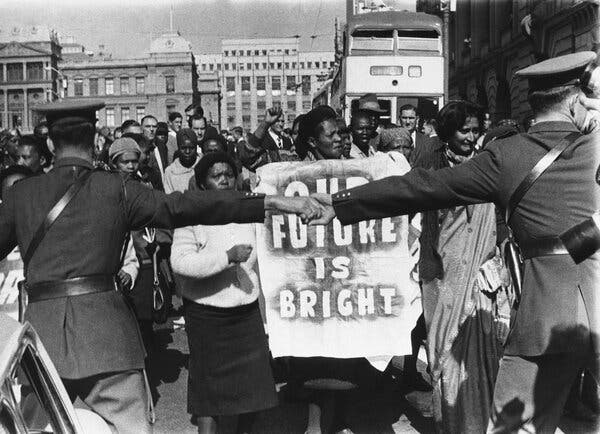